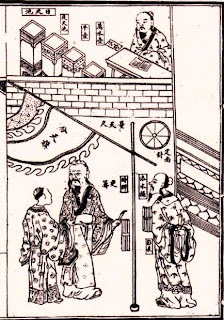 This is a picture taken from the book Yuan Hai Zi Ping 淵海子平 written by Xu Sheng 徐升 during the Song Dynasty 宋朝. The diagram shows the instruments used by an astrologer using the Zi Ping method. The water containers were designed to allow water to drip so that the water level showed the time at night. During the day, the length of the shadow of the pole cast by the sun showed the time.

Zi Ping method is the study of qi indicated by the year, month, day and hour each represented by the 60 stem-branch cycle. The 24 Jie-Qi 節氣 are used to define the months. The year begins at Li Chun 立春 and each subsequent month begins at a Jie. The entire set of four pillars are calculated using the solar calendar. The local solar time is used for the hour.

A picture is worth a thousand words.

This is an example of using one's own mistakes as the standard to claim that the correct ideas of others are wrong 以己之非，非人之是:

This shows that the author does not understand Shuo Gua Zhuan. His understanding of Wu Xing is also limited to the material part. And saying that the calabash is a tall tree is simply ignorance.

Using a calabash to reduce the effect of the sickness star is more or less like saying "An apple a day keeps the doctor away." No one claims that the calabash can cure all illness. The clown is really amusing. We are truly thankful.

You never hear people claim he holds the lineage of Issac Newton or Albert Einstein. In fact, all scientists learn from these great predecessors. They learn the basics but add new discoveries and this is the way knowledge grows. You are never fooled and cheated by scientists who claim to have the secrets that they would not disclose. With no disrespect to predecessors, they say, "We see more because we are standing on the shoulders of giants."

On the other hand, the Chinese tradition is to respect their teachers to the extent that they are infallible and whatever they teach is the truth and nothing but the unchanging truth. If we generously assume that we can master 90% of what we learn from our teacher, then the tenth generation lineage holder knows practically nothing. Well, it does not mean that after learning from our teacher we should not teach as we know only 90% of what our teacher knows. As a matter of fact, if a teacher encourages his students to discover new things all the time, he can easily surpass his teacher. This is what I expect of my students.

The lineage game is only a cheap commercial gimmick. If you hear someone claim that he holds the secret from a certain lineage and that no one else except he and perhaps other indoor disciples of his lineage know the secret, then you can conclude that he is a con-artist and an imposter. To lure people to learn from him, he would say that your teacher is leading you to walk the wrong path. When you ask what is the right path, he would say it is a secret which he discloses to those who deserve - meaning who pays a hefty fee to become his selected indoor disciple. This is really disgusting.

About 10 years ago, I went to fengshui a house. Opening the door was a pale-looking middle aged man. When I went into the house, I found that the windows were all closed and covered with thick curtains. It was very dark inside despite the fine weather on that day. I sensed unhealthy qi in the house. He confirmed that health issue was the main purpose of the consultation.

After taking the facing direction of the house (which was quite new) and did some calculation on my palm, I told the client three things to do:

1) Open some of the windows everyday and pull up the curtains most of the time.
2)  His bedroom occupied the north and northwest of the house and the bed was against the NW wall. I told him to move the bed to the north against the N wall.
3) I told the man to get up early every morning and walk in a clockwise direction around the block in the south and come back from the southwest. It would take about half an hour.

3 months later, the client called me to say that everything improved and he was not sick anymore. He then took my correspondence course.

Another 3 months passed and he emailed me to say he understood why I made the three recommendations. I told him, "Not yet!"

6 months later, he emailed me to say that he should also give credit to the half-hour exercise every morning on top of what was related to Feng Shui. I told him, "Now your understanding is complete."

The Future is Not Written on the Rocks

The third lesson is "The sea of learning has no bounds 學海無涯. The only way to reach the shore is being diligent 唯勤是岸."

Confucius said, "To learn without thinking brings confusion, to think without learning leads to danger."
子曰，“學而不思則罔，思而不學則殆."

To learn without thinking is the most common sickness. In the ancient days, people were taught that all stars and planets revolve around the earth and hence Heaven was considered round while Earth square 天圓地方. Today, we all know that our earth together with other planets revolve around the sun and our solar system together with other heavenly systems revolve around a common axis. However, do not learn without thinking to draw the conclusion that "Heaven round Earth square" is wrong. Mathematically, it all depends on the choice of the frame of reference. If we choose the frame of reference with our earth as center, then "Heaven round Earth square" is a good description of what we perceive. The basis of Feng Shui is the Ba Gua and the way Fu Xi drew the Ba Gua was to take what he saw at a distance 逺取諸物 together with what are close to his body 近取諸身. It is quite clear what he chose as the frame of reference.
To understand Zhou Yi and the Appendices, it is important to master the way ancient Chinese was written but it is more important to think to explore what the sages had in mind. For example, the innocent looking paragraph quoted below has been misunderstood by a lot of people who claim to understand the Yijing. The cause is the fact that each Chinese character can take several different meanings. You have to make the right choice using your brain, not your eyes or ears.
數往者順，知來者逆，是故《易》逆數也。
The two words 順 and 逆 here have the images of going with the flow and going against the flow. Obviously going with the flow is easy while going against the flow is difficult.
The word 數 appears twice here. The word 數 in 數往者順 has to be compared with the word 知 in 知來者逆. Both words are used as transitive verbs. We cannot literally translate the sentences as "To count what is in the past is following the flow. To know what is in the future is going against the current." This will need further annotation. If we translate the underlying meaning, then it will be like "To tell the past is easy, to know the future is difficult" without sacrificing the original flavour. The word 逆 appears twice also. In "是故《易》逆數也" the word 逆 means against. The word 數 here is a noun which is the short form of the compound noun 命數。It is believed that there is a number associated with each life. This number dictates the entire life of a person. The number is called the destiny number 命數 . However, the Yijing says no. "是故《易》逆數也" means "Therefore, Yi is against the concept of a destiny number that determines the happenings during the life of a person."
Some people believe that Yijing is used to tell the future as written on the rocks but it is simply an utterly wrong idea. Yijing is to tell us what we will encounter in the future but the outcome is not fixed. Yijing does not tell us how we will react to what we encounter in the future. We have our free will to do whatever and this will determine the outcome.