The home study course of “Upgrading Four Pillars of Destiny” is in the form of a ebook.

The cost of the course is USD500 but students who have taken my Four Pillars Correspondence Course will have a huge discount and pay USD100 instead. For those who have not taken my Four Pillars Correspondence Course can also take it together with this upgrading course at a total of USD610.
Please send email to fsrcenter@gmail.com to introduce yourself and I will send instruction to pay for the course.
The introductory page is like this: 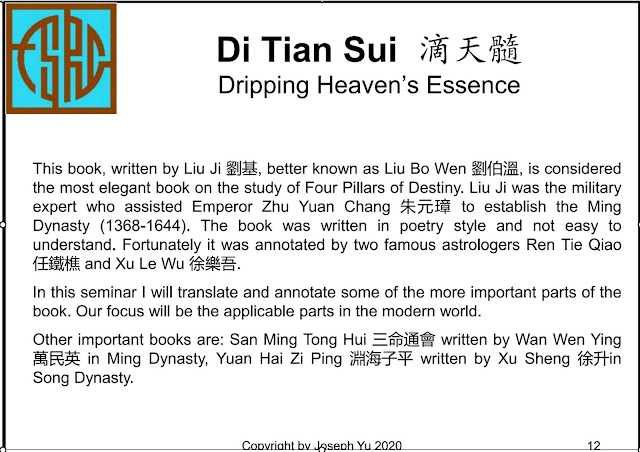 Wealth is what belongs to you. Anything that is under your control is your wealth. Do not take it as just money or your asset. It includes people under your control and even situation under your control. In the old days in China, husband and wife relationship is also a control-and-being-controlled one. Therefore, Proper Power is the husband of a woman while Proper Wealth is the wife of a man.

正財 - Proper Wealth. The narrower meaning is money made by proper means. You work and therefore deserve to be paid. In the broader sense, whatever that is under your control because of your effort is Proper Wealth. For a man, a legally married wife is his Proper Wealth.

偏財 - Unbecoming Wealth. The narrower meaning refers to money made not by proper effort. For example, money won by gambling is considered not made by your hard work and is therefore not proper wealth. It also includes money made by running a business that is not considered proper from an ethical point of view. In the old days in China, a man could have more that one wife. Apart from the first wife, the others were known as concubines. Concubines are represented by Unbecoming Wealth.

In the modern world we have to be careful to consider what is Proper Wealth and what is Unbecoming Wealth with some flexibility.

Output is what comes out from a person. This includes the children of a woman, production by a person, ideas and verbal or written work. If the yin and yang of the spirit is the same as that of the Day Master, it is considered more truthful representation of the person. If the output has opposite yin/yang as the Day Master, it is considered revolutionary. The original Chinese terms are quite inspiring.

食神 - Gracious Output. The meaning of the Chinese term is a spirit that feeds on the person. When a person is full of ideas, he feels frustrated if he is not having the opportunity to express his ideas. This is the same as a mother with a new born baby. When her breasts are full of milk, she needs her baby to feed on her to release the pressure and feel relieved and happy. The baby is the spirit that helps her to release her mother love through breast feeding. Gracious Output has the same yin and yang polarity as the Day Master. It is his truthful expression and production. The more knowledgeable a person is, the more opportunity seeking is he to find satisfaction. The more resource to support a person, the more he needs output to show his productivity.

傷官 - Drastic Output. The meaning of the Chinese Term is to hurt the officer. That means it hurts your Power Spirit. It has the same yin-yang polarity as Proper Power and there is a likelihood that it clashes the Proper Power. This spirit may therefore be detrimental to his power or fame. For a woman, it may also hurt her husband. Well, what are the good points of this spirit? It represents unorthodox ideas and  the person is considered rebellious or at least usually going against  tradition and the established rules. The person tends to be inventive and his production is ahead of the time. Isn't it great?

Again, the entire chart must be examined with care and do not jump to conclusion once you find a spirit in the chart.

Joseph Yu
Posted by Joseph Yu at 7:36 PM No comments:

劫財 - Robber of Wealth. It refers to a stem of the same element but opposite in yin/yang as the Day Master. The translated term "Unfriendly Parallel" has a broader sense that includes someone who pretends to be a friend or even a partner in business but actually is a traitor going after money and position.

When we analyse a chart, never take it rigidly that a friendly parallel is always friendly and that an unfriendly parallel is always robbing your money. The quality of the chart can overrule the suggestion by the names.  Come to think about this: which is better, a lot of incapable people working shoulder to shoulder with you making negligible profit, or one very capable person who works for you requiring a lion's share of the huge profit made?

The Chinese term is 印 (Yin) which is the seal of authority. In the old days, when someone was assigned an important government post, the emperor would give this person a seal of authority to act on his behalf. This seal offers support to whatever the person does on behalf of the emperor. It makes him strong.

Of course, to be able to get the seal, one must become famous to attract the attention of the emperor. The easiest (and hard) way was to pass the imperial examination with flying colors. The world today has changed a lot. That is why the term is translated as Resource which is an ingredient to support a person. This can be financial resource that comes from his parents. It can also be support from his boss to perform his duties with authority.

正印 - Proper Resource covers a person's support from his parents in his earlier days, and his boss when he works in a company. If he is self-employed, he can get resource from financial institutes and also his clients. In a democratic country today, the head of state has his authority sourcing from the citizens who are his boss. Without such support by winning an election, he cannot be the president or the prime minister. Proper resource also covers a person's knowledge that is his main support in life.

偏印 - Unbecoming Resource is support that is acquired through a more or less improper channel. For example, a person can win an election by lies to please the people to become his supporters. He can make promises with no intention to keep. Such behavior can be extended to our everyday lives when we want to gain support from our superiors. Unbecoming Resource is also known as The Wicked God of the Owl 梟神. It will be dealt with later.

It is the way the support comes to a person that distinguishes between the two types of resource. Even in the old days, a government post can be obtained through bribery just like what is happening in countries where corruption is part of daily life. In short you can easily distinguish the two by examining the harmony or disharmony generated.

Ten Spirits 十神 are the most important ingredients in the study of Four Pillars of Destiny 四柱命理學. The four pillars consist of a stem and a branch in each with a total of eight words BaZi 八字. The term BaZi is used by the less intellectual people while the term Four Pillars is used in the academic field.

In this series I am going to explain the translated terms of the ten spirits.

正官 - Proper Power. 官 is an officer but when this spirit is related to just anyone, it is the term power that is more appropriate. The adjective "proper" describes the fact that this spirit has a yin-yang balance with the person. This spirit brings fame and power to the person. For a female, it also represents her husband.

偏官 - Unbecoming Power. Usually this spirit also brings power but the way it comes may not be proper due to the fact that there is no yin-yang harmony. It can be more powerful than Proper Power because it has more fighting spirit. For a woman, it also represents her husband but there is inevitably disharmony in the relationship.

Last night, in my dream, I met an old man whom I might have seen in pictures of ancient books. He smiled at me, "Yang Gong, during his retirement, watched the yin and yang qi  楊公飬老看雌雄 Hahaha!" I approached him and bowed. He held my hand and said, "You have been thinking of me and that is why I come to meet you." I opened my mouth but could not say anything.

He padded my shoulder and said, "I know you are upset with people using my name to charge suckers obscene amount of money for something rubbish." I looked at him and wondered how did he know all this.

"Well, take it easy," he continued, "Only stupid people are cheated and they deserve to be victims. Don't worry about the good and clever people."

I could not talk but in my mind I wanted to ask why he was not worried about these people smearing his name by claiming to be his lineage holders.

"Never mind," He said in a calm voice, "people will know that my nick name is Yang Saving the Poor and not Yang Billionaire Manufacturer. I used Feng Shui to help the poor people to benefit from the stars so that they gained confidence and skill to make a living. This is what Feng Shui is about. It does not bring tremendous wealth to people without their honesty and effort."

I was about to ask him about whether it is true that the Emperors' tombs in the Song, Ming and Qing Dynasties were designed according to his teaching. He smiled and said, "Good Feng Shui is for the living. If a grave site has good Feng Shui, it needs the descendants to frequent the site and bathe in the qi to get the benefit. That is the core theory of my teaching. All the imperial graves and palaces were not built according to my Feng Shui technique. It is easy to see how each Dynasty deteriorated rapidly after the first few emperors."

I was like seeing lightning and thunder in my mind and woke up. Please share my dream and the true teaching of Yang Gong.